As AJ mentioned, he and I attended the CodeX FutureLaw 2014 conference at Stanford Law School.  These types of conferences always provide good food for thought, particularly for those working to bring disruptive change to the legal industry, and FutureLaw 2014 was no exception.  While I was impressed with several presentations, my favorite was delivered as a “lunchtime keynote” by Dan Siciliano.

In his eloquent and engaging presentation, Dan introduced an interesting model of how technology brings about disruptive change in legal practices where the true value is primarily in exception handling (i.e., >97% of the work is routine).  In short (and at the risk of not doing it justice), his model has two major phases:

Phase 1 leads to higher margins for the firms that embrace these technologies early, and lets them pull slightly ahead of their peers.  Phase 2, however, is where the disruption begins.  As the increased savings are passed along to clients, their cost of consumption drops and their satisfaction rises rapidly, allowing the leading firms to pull so far ahead that they eventually come to dominate their field.

Dan turned to immigration law, where he has significant expertise as an academic, author, and entrepreneur, to illustrate his point.  According to Dan, immigration is one of those practice areas driven by exception handling, with only 3% or so of the work truly novel and the rest routine.  As he explained it, Phase 1 for immigration practice was all about getting faster.  The adoption of computers and case management systems in the 1990s and 2000s increased the pace at which these largely routine matters could be processed.

It wasn’t until this decade, though, that immigration practice entered Phase 2, which Dan characterized as getting smarter.  Through the careful application of expert systems, machine learning, and other modern technologies, smart firms have been able to radically improve service levels (primarily consistency and communication) for the routine work that comprises the bulk of their practice.  At the same time, the efficiency gains give them more time to focus on the exceptional cases, also yielding better outcomes and service levels for their clients.

Over time, the firms at the leading edge of this trend will simply pull further ahead.

But what does this have to do with ediscovery?

In reflecting on Dan’s theory, I’ve concluded that ediscovery isn’t really that different.  From the perspective of ediscovery technology vendors, Phase 1 was driven by drastic reductions in the costs of storage and computing power over the last 30 years, leading to corresponding reductions in the cost of production (producing/providing the software, not discovery production) and improved margins for producers (ediscovery vendors). 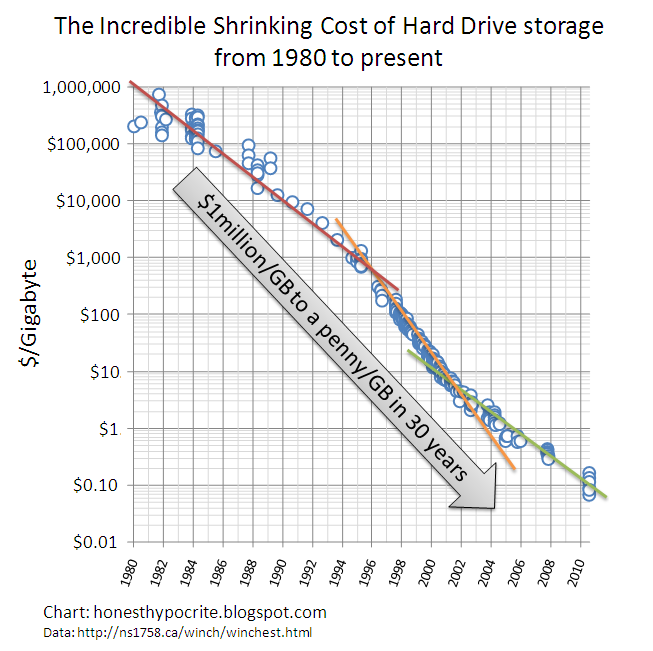 Data storage costs have declined rapidly over the last 30 years.

We’re now on the cusp of Phase 2, where we will finally see radically reduced costs of consumption.  As technologies like deduplication, cluster analysis, email threading, and predictive coding become mainstream, their increased availability will lower overall ediscovery costs (particularly in document review, which still accounts for the vast majority of ediscovery expenses) while also improving outcomes for attorneys and clients alike.

It is up to the providers, however, to make these technologies affordable.  Ralph Losey said as much back in 2012 when commenting on the RAND report that touted the transformational potential of technology assisted review (TAR).  Ediscovery technology vendors that lead the way here, like the cutting-edge immigration practitioners in Dan’s FutureLaw presentation, will reap the rewards.

Litigation Readiness in the Wake of a Pandemic

The Legal Consequences of COVID-19 When organizations were mapping out their 2020 strategies and initiatives,...

A Shared Space: How it Fosters Collaboration

Experts believe that collaboration–or at a minimum, the need to collaborate–will power the legal profession...

According to Heidi Gardner, Distinguished Fellow at Harvard Law School and author of Smart Collaboration,...